Editors of new Google Sites can now add content as a full page from the following sources: custom code, other websites, and Google apps such as Maps and Docs. Previously, editors could only add these elements as part of a page. Learn more about embedding content in new Google Sites.

You can now use familiar keyboard shortcuts Ctrl + C (or Cmd + C on Mac), Ctrl + X, and Ctrl + V to cut, copy, and paste Google Drive files in your Chrome browser. Additional things to note:

In addition to seeing a file’s name, owner, modification date, and size, Google has added a column to include location information in the Search, Recent, Starred, and Trash Google Drive views on the web. 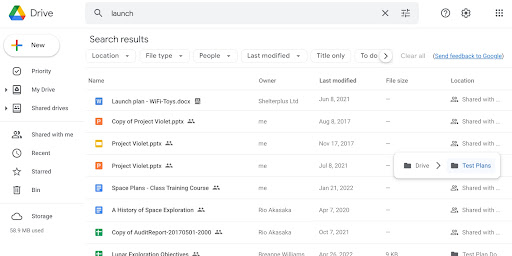 In Google Tasks, you can now mark important tasks with a star (similar to functionality that currently exists in Drive). Additionally, you’ll be able to view or sort your starred items across various task lists in the new starred view.

You can now set the duration of your "Do Not Disturb" status in Google Chat to a specific date and time. This feature is now available on the web, Android, and iOS devices. Learn more about changing your Google Chat status.

Google has refreshed the layout of email notifications sent by Google Calendar to make key event details more accessible. In addition, when you receive an email notifying you of a modification to an event, such as a time or location change, it will display both the old and updated information.

Google has updated the experience for removing participants from a meeting in Google Meet. Now, when a host or co-host removes a participant from a call, they will be prompted with additional actions. Specifically, they can opt to:

Learn more about adding or removing people from a Google Meet video call.

Picture-in-picture mode and multi-pinning are now available in Google Meet in Chrome web browsers. You’ll be able to see up to four video tiles of meeting attendees in a floating window on top of other applications. Additionally, you can now pin multiple video feeds. Learn more about multi-tasking with picture-in-picture mode in Meet.

You can now print personal and Google Chat spaces Task lists on the web. Learn more about printing your Google Tasks.

In 2019, Google released the ability to edit Microsoft Office files in Docs, Sheets, and Slides and sync Docs, Sheets, and Slides for offline use. Google has now announced the ability to sync your opened Microsoft Office files offline via Google Drive on your desktop. (Note: This change only applies to files that have already been opened in Office editing mode.) Learn more about enabling offline access in Google Drive.