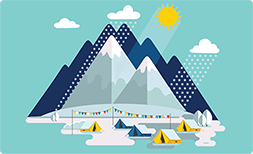 In 2017, the ITS Cloud Migration Strategy called for ITS to move as many applications as possible to a cloud environment. At the time, the U-M cloud environments (Technology, Knowledge) were not ready to receive ITS application migrations. Foundational elements were not in place to enable efficient and secure adoption. Teams attempting to migrate applications to the cloud needed to work outside of their project scope to establish foundational elements before their migration could begin. In addition, each migration team would be required to solve the same challenges, over and over again, causing a significant waste of time and resources. ITS determined that in order to successful migrate significant numbers of applications, foundational infrastructure needed to be built in the cloud.

To develop the critical components needed for application moves to a cloud Infrastructure as a Service environment, ITS chartered a Virtual Data Center (vDC) priority project.

For the Virtual Data Center project, ITS assembled and co-located a small core group of dedicated staff who were most excited about moving to the cloud, and challenged them to create a workable virtual data center (vDC) in one cloud provider, AWS. This team reached out to others in the organization for support, input, and requirements as needed. Working on a six (6) week timeframe, the first version of the vDC was built by December 2017.

With the launch of the Cloud Infrastructure Transformation Program in March, 2018, This core vDC group is now the CITP Technical Team. The Technical team continues to identify, prioritize, and solve issues related to deploying applications in AWS. They act as a strong central core for configuring and deploying core technologies in AWS, after which application moves to the cloud will be more straightforward and move more quickly.

The ITS Virtual Data Center (vDC) is a set of core technologies, network architectures, and account structures that allow ITS staff to more easily use Amazon Web Services (AWS). It is not an out-of-the-box solution for running applications in AWS; instead, the vDC provides basic services commonly available on campus like authentication, backups, and networking to provide ITS staff familiar technologies as they deploy solutions in AWS.

A best practice in AWS is to separate workloads under unique AWS accounts. For ITS, a workload is essentially a service, with some exceptions. This practice of separating workloads into accounts provides a “blast radius” around a service so that account-wide issues don't’ interrupt service in other accounts. It also allows for cost control and monitoring within an account. The ITS account structure also provides organization-wide views into all ITS accounts for activities such as OS patching as well as aggregated billing.

Every account will have one UM-provided VPC within the us-east-2 (Ohio) region.

Each account has a standard VPC as shown in the diagram.

Each subnet group has 3 subnets, one per AWS Availability Zone. A fourth subnet is reserved, but not configured, for expanding into a fourth availability zone when it becomes available.

For more information about Accounts, networking, managed operating systems, and many more subjects for using the vDC, see the vDC Documentation repository on Gitlab. (Available on campus networks and VPN.)

Have questions about the Cloud Infrastructure Transformation Program?