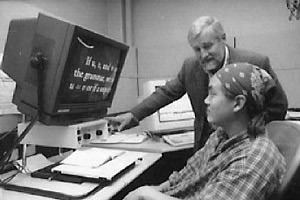 The James Edward Knox Center is named for Jim Knox (1944–2010), the first Director of the University of Michigan Adaptive Technology Computing Site. Jim became interested in computer accommodations in the mid-1980s when a blind student, A. Douglas Thompson, inquired why he had to pay fees each semester to use computer equipment that was inaccessible to him. Together, Jim and Doug established the Barrier-Free Computer User Group, which met regularly to learn about assistive technology options and advocate for improved accessibility.

Over time, Jim worked tirelessly to develop assistive technology initiatives at U-M. Besides providing one-on-one assistance to U-M community members, he helped develop the Ergopod, an innovative accessible workstation, and Talking Points, a Bluetooth-based orientation system. He co-authored papers for a number of major assistive technology conferences, and was acknowledged as an authority on assistive technology in university environments.

Jim had a passion for good food, classical music, nature, travel, literature and sports. His gregariousness was as legendary as his kindness. He continues to inspire loyalty and affection throughout U-M, and the re-naming of his cherished computer lab ensures that his legacy will endure.

"One of the University's first computer whiz kids, Jim was invited to teach at Harvard University after he and a fellow graduate co-authored a paper on the first computer-oriented graphical geographic information system (GIS). Jim stayed in Ann Arbor and worked for the University of Michigan for more than 30 years. In the mid 1980's, in addition to working as Postmaster/​Ombudsman/​User Advocate for Information Technology Services, he established the adaptive technology computing site in the Undergraduate Library where students, staff and faculty with spinal cord injuries, visual and hearing impairments, dyslexia, carpal tunnel syndrome, and other disabilities have access to adaptive hardware, software and workstations. He even helped design special needs computer workstations... Countless students have credited him with their academic success."

"In a very unsung and understated way, he was always working to help folks with disabilities be better able to use computing technology. That was a big passion for Jim. He also believed in computing overall and wanted to keep the computing environment safe and friendly for everyone so that all could benefit from the positive things it has to offer. He was one of the rocks of simple, positive practice on which the U-M computing community was built over the years.

"One can't really appreciate that kind of contribution enough until you travel to other campuses where you see a more convoluted, locked-down, dysfunctional computing environment. It makes all the difference in the world in your daily work, and our system was born from a caring philosophy about people and a dedication to work through the hard problems so users wouldn't have to. Jim wasn't the only one, but he was right there on the front lines, never giving up, always advocating for the user against unnecessary bureaucracy, restraints or obfuscation. And he gained a very positive reputation in the IT community for these efforts."